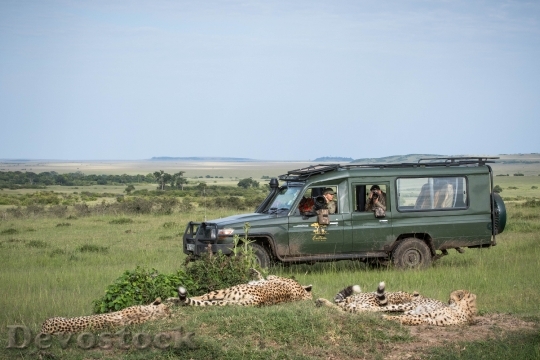 
KENYA, Maasai Mara: In a photograph taken by the Ministry of East African Affairs, Commerce and Tourism (MEAACT) 27 June 2015, Bill Rautsaw (in rear seat) from central Idaho in the United States photographs a family of cheetahs in Kenya's Maasai Mara National Reserve. A repeat and regular visitor to Kenya, the retired United States Forest Service worker and conservationist feels a strong link between his home town and the East African nation through his involvement with conservation and his work with endangered species. Rautsaw says coming to Kenya changed his life, enhancing his love and feelings for the natural world, exposing him to a wide variety of cultures through the country's biodiversity, wildlife, and landscapes. By his own admission, Rautsaw says Idaho is just about as far away from Kenya's tropical beaches and coastline and it's world famous Maasai Mara National Reserve as you can get, but it's more than worth the trip, and the distance is worth every second that you spend in the country. It's a country of many choices he says, and one definitely not to be missed. MANDATORY CREDIT: MEAACT PHOTO / STUART PRICE.